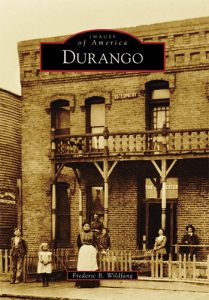 Join Iman Marghoob who will lead out in the Book Club Friday morning (time TBD) while ADM is in session. The Book Club is intended for guests of ADM attendees so please share this information with your guest.

The storied town of Durango is situated on the farmlands of the Ancestral Puebloans, which later became the hunting grounds for the Southern Utes, in the Animas River Valley of southwestern Colorado. Founded in 1880 as the headquarters of the Silverton branch of the Denver and Rio Grande Railroad, Durango became the supply depot for gold and silver mines up and down the Western Slope.

One of the few old-time cowboy towns in Colorado that retains the vibrancy of a self-supporting downtown of hotels, restaurants, and retail businesses, Durango has worked actively to restore and remodel historic buildings. Enhanced by stories of Spanish explorers, miners, settlers, early entrepreneurs, and the desperadoes of Western lore as well as Hollywood myth, Durango has earned a reputation as one of the Rocky Mountains’ favorite travel destinations.

Click HERE for questions or to request additional information regarding the 2021 ADM Meeting.